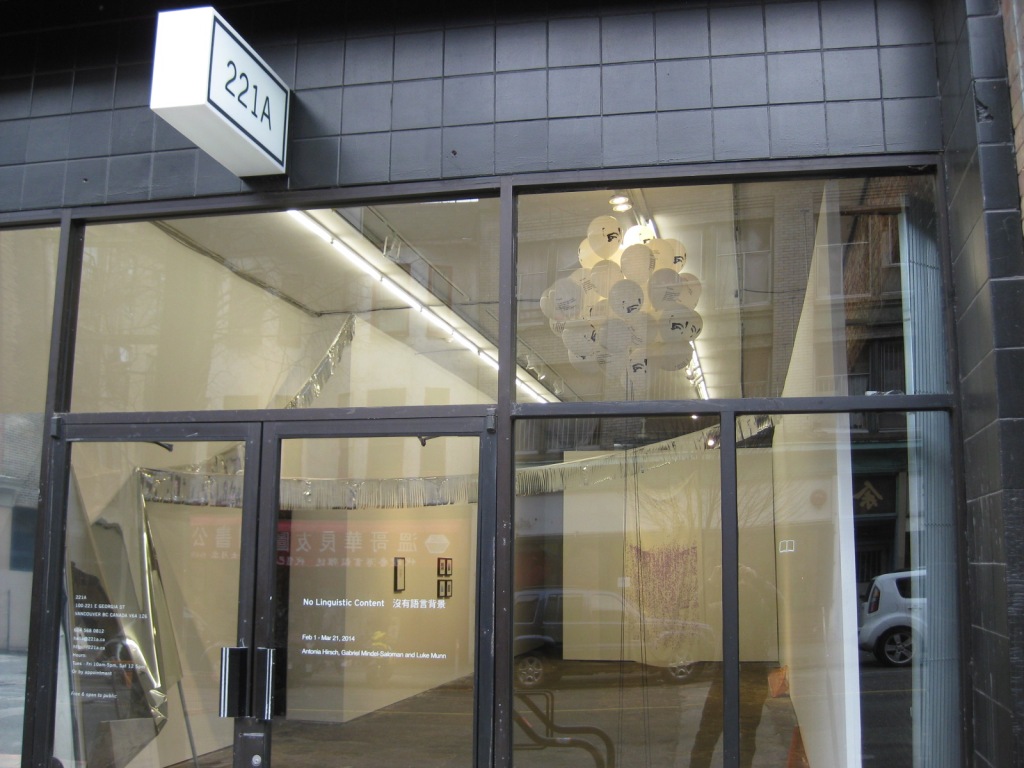 No Linguistic Content is an exhibition of new work by Antonia Hirsch (Vancouver/Berlin), Gabriel Mindel-Saloman (Vancouver) and Luke Munn (Berlin) that responds to contemporary forms of surveillance, considering how design can work to counteract an excessively coded city.

George Orwell’s novel 1984 has often been cited in reference to authoritarian regimes and state control. Through a dystopian narrative, the main character, Winston, works for the “Ministry of Truth” to rewrite history in support of the ruling parties modus operandi. The historical revisionism in 1984 reflects the means by which propaganda acts as an art of the state, where social codes and conventions are determined or imposed through tactics of persuasion.

Today, Orwell’s tropes of societal control and surveillance are clearly visible in the architecture and design of urban space, yet the surveillance and control of space is no longer limited to monitoring systems of CCTV, an all-seeing eye, ‘the gaze’, but has also come to be determined through sensory apprehension technological devices – a system of deterrents. For example the “ultra-sonic youth crowd dispersal system” called the Mosquito, commonly used in public or semi-public infrastructure such as malls and storefronts and the popular LRAD (long range acoustic device), capable of producing a ‘beam of sound’ for protest control. No Linguistic Content brings together artists who have proposed a means to mitigate ever-present forms of surveillance and urban control, allowing for the emergence of extra-linguisitic subjectivities.

Hirsch’s work contemplates hierarchies of power implemented through visual regimes. Her project, specifically developed for 221A, rehearses the mirrored surface—and in particular the one-way mirror—in a heterogeneous configuration, touching on the dynamics of interiority and exteriority, private and public space, narcissism and empathy, and inclusion and exclusion. Often deployed to ameliorate the appearance of what is otherwise deemed contemptible, the shiny, reflective window treatment greeting 221A’s visitors is commonly associated with seedy stores and clinics that occupy many of the centre’s neighbouring streets.

Salomon is a sound artist that creates works that rethink the comprehension of sound and it’s disruptive capacity. Saloman’s work in this exhibition takes the idea of sensorial experience as another way to negotiate space, not just privileging the visual senses. Salomon moves away from the idea that acts of surveillance are defined by ‘the gaze’, exploring other sensory ways to consider how our movements can be predetermined and controlled.

Munn has created three works to be included in No Linguistic Content that reflects his wider practice and research of the intersection between technology, design and the body. Sent Mail Sheet is a screen print banner (1mx3m) that was developed out of mined data from 8 years worth of emails, generating an image of life patterns and productivity investigating the concept of big data becoming materially intimate. Booster Bag is based on the “booster bag”, a commonly used anti-detection theft tool that blocks radio frequencies from security detectors when exiting retail stores with stolen goods. Munn’s version instead blocks invisible topographies such as electromagnetic fields produced by wireless communications that increasingly define public and private space.

No Lingustic Content runs until March 22nd and is accompanied by an artist talk with Antonia Hirsch on February 4th and by Gabriel Mindel-Saloman on February 19th and a screening and discussion led by the project curator Bopha Chhay on Mar 12th.

*The name of the show is taken from a typeface that was designed by artist Sang Mun. The typeface has the ability to defy NSA digital surveillance systems. ‘ZXX’ is a library of congress classification code that stands for ‘no linguistic content; not applicable’. Texts and publications are allocated this code if the content is not able to be classified or determined by subject matter or other significant points of reference, falling into these interstices and defy classification.

View all posts by gmsmg