Gabriel Saloman is an interdisciplinary artist whose work, while generally collaborative, also takes the form of individual projects, performances, media and printed matter. His work is most often research based or else a response to philosophical, social and political concerns outside of his work as a collaborative artist.

The politics of participation within art has universally assumed that political agency and emancipation is conducted through an audience’s activation within the artwork itself. Cache considers the opposite to be true and that it is the artist who must become the participant, engaging within the life-forms of social politics. What is brought into the gallery is a translation, communicated through aesthetic and affective realms. Hidden within all of these artworks are weapons which long to return to a larger sphere of social antagonisms. 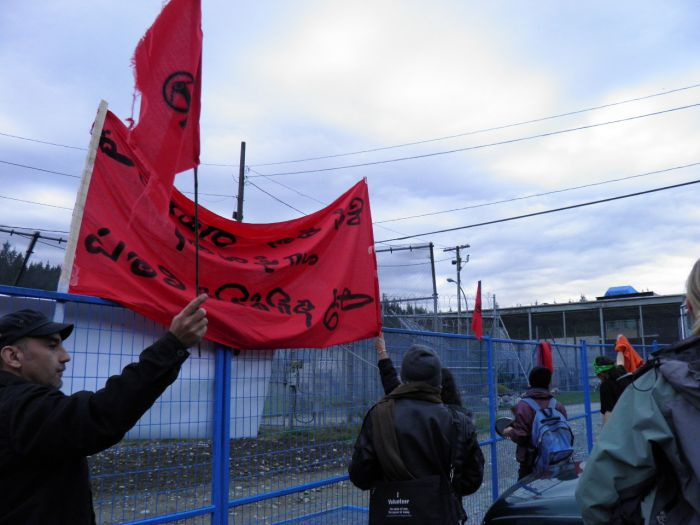 “Music for Prisons” is a sound composition and a series of related projects that formulate around the use of noise as a form of protest, specifically in anti-prison and prisoner/refugee solidarity work. “Noise Demos” involve groups of folks gathering outside of prisons with a range of instruments, PA systems and other sound making devices attempting to connect with incarcerated persons – their collective noise able to cross the prison grounds and pass through the bars and walls that otherwise separate those who are inside from those outside. “Music for Prisons” is composed of original music by Gabriel Saloman as well as field recordings of noise demos held in support of Tamil refugees who were imprisoned in Burnaby in 2010.

It is not ambient sound, nor is it a performance that situates itself within the subjectivity of the prisoner. It is music to be played outside the prison walls, both to acknowledge my privilege of mobility and to refuse any attempt to ameliorate the experience of prison in the form of pleasurable entertainment. The existence of prisons themselves are intolerable and the intention of this work is to be of use in further disruptions of the placid invisibility of these prisons within contemporary society. It is meant to be played or even performed in the context from which it draws its inspiration. As to its status within the gallery, and its intended meaning within this situation, it is for the gallery goer to decide.

In other words… please take this recording and blast it at full volume at the prison walls until they no longer exist.

Taking Marx & Engel’s incantatory text as a spell who’s time has arrived, the Communist Manifestation is an investigation into the social formations and their attendant ruptures which have been manifesting with heightened speed and drama in recent years. From the riots which have formed around mega-events such as the Olympic Games to the Occupy movement, the archetypal, the uncanny and the anarchic qualities of the new commune has seemed to awaken in some of the least expected places. Embracing the mystical qualities of this phenomena, and those of the original manifesto, these art works hope to further enact this unfolding event as tactical artworks which may affect, educate and create new spaces of communism.

Taking as its inspiration Slavoj Žižek’s October 9, 2011 speech at Zuccotti Park in New York and the “people’s mic” whcih broadcasted it to those who were at Occupy Wall Street’s open forum, Songs for Žižek imagines his words as a spell attempting to lift a curse. Equal parts score, instructional, concrete poetry and participatory artwork, it is also an easily reproducible and distributable text which can be printed, posted and plastered where ever it is needed.

A sound work that includes video and text, Olympic Bardo considers the uncanny similarity between the found sound of the city of Vancouver, BC during the minutes immediately before and after Team Canada won the gold medal in Ice Hockey during the 2010 Winter Olympics and the deep and massive drones of Tibetan horns calling monks to meditation. It asks the question of what we should make of things were this NOT a coincidence but in fact an event precipitated by the riots in Tibet and its occupied territories in China, riots which have found their mimesis in the streets of Vancouver during and after the Winter Olympics, as well as London, the host of 2012’s Summer Olympics. Olympic Bardo proposes that what we are hearing is the sound of the invitation to an emanation of Kali, a goddess of destruction and transformation who’s work seems to be playing out all over the world in unexpected ways.

Beginning with the question of what a contemporary folk music culture might look like, Contemporary Folk Research investigates the possibility of popular music (distinguished from Pop Music), field recordings, constructed documentary situations and social anthropology within the context of the City illuminating our contemporary cultural formations. The act of recording itself begins with negotiation and invitations for exchange that construct an intimate and extra-ordinary performance of music. While these actions openly flaunt their self-awareness, they none-the-less present surprisingly authentic experiences of music, both between individuals and in the commons.

Songs for Sick Buildings is an anthology of field recordings of people singing in public to buildings and landmarks that in some way are in need of healing. Some of these places are old and neglected, others haunted by troubled histories or troubling residents. Each person or group who offered to perform this healing act chose their song and their location.

For residents of cities, the fabric of our everyday lives is formed by the architecture that surrounds us. How can we move beyond alienation and isolation and see the City as a place alive with history and presence. Songs for Sick Buildings is not only an invitation to these artists to reclaim their public space with the power of their voices, but to everyone, everywhere.

For many no place offered (or remains to offer) a more harmonious education in the DIY ethic than the House Show – a quasi-legal musical event that happens in basements, backyards and living rooms all over North America, organized by a loose and evolving networks of artists, musicians, students, anarchists and music fans. A perfectly haphazard scenario, the house show, as a platform altered, built-up, constructed and deconstruct over and over again by countless persons, offers a glimpse into the myriad ways in which one might live their life and (co)create a culture. In full, the House Show is not just a place to be entertained, but a locus to discover a whole range of life-ways, social politics and collective practices and skills. The House Show is a School House, a site of learning and exchange of ideas no less so than any other.

As a series of events, discussions, and documents House Shows as School House (HSaSH) acts as a means to intentionally open up a conversation about what and how we learn in this discrete environment of Punk/DIY culture. Through documentation of house shows, collaboration with local communities and public conversations around these activities House Show as Schoolhouse encourages a continuing opening up as to how we can create radical and authentic spaces of education, as well as discuss a history and its continuing effects… by means of D.I.O. (Doing It Ourselves!).

HSaSH was a collaboration with Minneapolis/St.Paul based musicians and artists that included events in a variety of homes, quasi-legal art spaces and even a full fledged parade. It was coordinated in concert with Red76’s second Surplus Seminar at the Walker Arts Center.

The question of what a contemporary Alan Lomax would do were he dropped within the turn of the century milieu of Portland’s independent music community prompted this collection of recordings. Gabriel Saloman visited a variety of musicians and recorded intimate concerts for one on their porches, in their kitchens and bedrooms. All of the musicians were invited to consider their ideas of the word “Free” in the context of their music. The results range from stark and vivid improvisations to heart felt songs and riotous sing-a-longs. A limited edition cd was released and distributed by Red76.

Free States is an investigation into the fractal nature of identity and governance that exists within and beyond our generalized and official view of “Nationhood” in North America. Removing existing lines of demarcation from maps and atlases, we can begin to create a new map that reflects existing and historical autonomies, ruptures and dislocations from the hegemonic republics that dominate this landscape. Communes, Prisons, Reservations, Micro-nations, Religious Colonies, Occupations, Proposed Secessions, Capitalist Utopias and Wilderness are among the diverse features of what slowly constitutes a new map.

In 2009 ASDF- invited me to participate in a group show called S.A.S.E. In their own words, this was the project:

S.A.S.E. uses the idea of the self addressed stamped envelope as its foundation (a method of distribution within the postal mail system that is always initiated by the one who wants to receive the information). This method of distribution was (futilely) translated into a digital communication system, e-mail. Eleven people were asked to organize an exhibition of images that would be contained within the space of an e-mail. Ten e-mail exhibitions were created (each includes a selection of images, a statement, and a works list). All the images were found online – either from web-sites or in e-mails. To receive the e-mail exhibition one would initiate the process by sending a request e-mail. The exhibition e-mail would then be sent to the requester.
My contribution was a historical look at the various histories of Sovereignty and Nationhood (successful or otherwise) which have developed into our contemporary context of Tea Parties and calls for Secession. Following S.A.S.E. Miscalled a Republic was archived on a webpage.
Links:
ASDF- | S.A.S.E. | Miscalled A Republic webpage

Pop Occulture looks at the intersection of Popular Culture and the Occult, suggesting a historical and textual interweaving of the two. A play between exoterica and esoterica, these projects attempt both highlight and further develop an understanding of the overlap of myth, archetype, sigil and ritual that exists within this realm.

Psychic DJ began as an relational intervention at the Vancouver Art Gallery during their 2009 show “How Soon Is Now”. The exhibition included Instant Coffee’s “Nooks”, one of which features an imbeded record player and a selection of 45″s. Over the course of a month I offered free psychic readings using the 45″s as a divination tool. Since then Psychic DJ has appeared in a variety of public and private forums offering a unique experience of fortune telling through the detritus of pop-culture and using Pop Music as an esoteric text.
Links:
Psychic DJ blog |
Artworks | Music | Writings | Dance | Concepts | CV